In 1858, the Imperial Government sent John Palliser out to find a feasible route from the Prairies through the mountains so it could extend the railway. A geologist, named Sir James Hector, was among those on the expedition team. Following a string of bad events, Hector ended up stumbling upon the Kicking Horse Pass. As the story goes, he was camped out at the Great Divide when one of the team’s pack horses got loose and crossed the river. Sir James jumped into the water and swam after it, eventually rounding the horse up. While trying to tie it to a tree near his horse, the two animals became enraged and started fighting. During the ruckus, Sir James suffered a vicious kick from his own steed. The sheer force broke three of his ribs and knocked him out. In fact, he was unconscious for so long, his three Native guides were convinced he was dead and decided to bury him. As they were carrying Sir James’s lifeless body to a grave some distance away, he suddenly came to. When he was well enough to move around, he explored the valley and eventually discovered the pass that became the route through the mountains. The pass and the river were dubbed “Kicking Horse” in his honour.

Wondering what our tours are all about? What to bring? What not to bring?

Looking for a perfect year-round gift? Send someone whitewater rafting

Rafting Season is On! 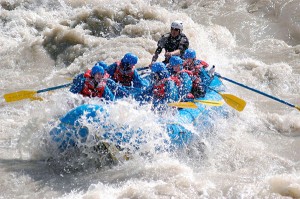 You can read about them here